Running GoCD on OpenShift - An Alternative to Jenkins

At the recent DevOps Days, there was a break-out session that was titled something along the lines of “anything other than Jenkins”. Curious by the title, I jumped in see what other tools people had experience with and how they were using them [in their kubernetes clusters]. Maybe this shouldn’t have been a surprise, but everyone in the room was primarily using Jenkins and most of the conversation was about how they were using it. While this isn’t a bad conversation, it highlighted one point, which was that we often stick with what we know.

As someone who works on a lot of OpenShift environments, I’m intimate with the challenges that Jenkins brings (security updates anyone?), but am also a fan of how OpenShift made it usable for developers. Primarily the custom integrations that Red Hat pre-packages inside of their Jenkins instance to support:

However, even though it’s easy to deploy, it doesn’t often get users up an running without a little more effort (do you want a scripted or a declarative pipeline? plugin or shell? exactly how many resources do I need to give this thing?). And from what I often hear, teams are looking for a simpler alternative. With one of our customers, a small team is deploying multiple CI & CD tools to perform a bit of a show & tell to the community, solicit feedback, and determine if we can land on a better option. One of the tools I’m evaluating is GoCD by Thoughtworks.

I’ve been playing with @goforcd for the last day or so to learn how its deployed and whether it’s a viable alternative to the way many OpenShift customers might be using Jenkins today. Here is what I’ve learned so far…

First of all, I will say that I’m a big fan of the documentation for GoCD. In the short time I’ve spent with it, it’s pretty straight to the point and thorough enough to use the tool.

From a very high-level architecture standpoint, I don’t see a huge difference in how it operates compared to Jenkins. In general, there’s a main server component that farms work out to agents as desired. It supports dynamic agents and auto-registration, which is similar to the cloud capabilities of Jenkins. If you dig deeper though, it appears that the database can be separated and highly-available deployments are possible. I’m sure there are plenty of other deeper architectural differences that I haven’t had time to explore yet.

The goal in this blog is to see if each team can run their own “ephemeral” instance in a codified manner. Which is definitely possible. Also, of note, this blog does not use the Helm deployment, which will be discussed.

Extending the Images to Support OpenShift

The standard docker images will not run on OpenShift due to the same reasons that many “off-the-dockerhub-repo” images won’t run. They often aren’t authored to support the security constraints that OpenShift appropriately imposes. In general, this can be summed up as the support for arbitrary UID’s (with fine grained rbac controls) and as a result, ensuring that those UID’s have the proper permissions on the application directories.

Note: All code for this blog is stored here.

In the above referenced repository, separate folders exist for the server and agent components:

Agents can be either manually admitted to the server, or automatically registered. In this environment, automatic registration is key so that agents can scale appropriately without the requirement of human interaction.

The agent is also deployed in a similar manner to the server, but has been customized based on the needs of our environment. The agent is based off an existing GoCD agent image, and adds:

Note: If redeploying the server component, the agents also need to be redeployed since the registration process happens upon startup.

With at least 1 server, and 1 agent, how does this scale?

The easiest answer for our environment, in which each team runs their own instance, is to add a Horizontal Pod Autostaler to the agent deployment configuration. This was a straightforward process and worked easily in the lab. One element to note is that GoCD has an option to download materials within each stage. This should be set to true if autoscaling is turned on to ensure the agent downloads the appropriate git content when running a stage.

One of the largest items that excites me about GoCD is the promise of configuration as code. I struggle a lot with multiple aspects of Jenkins that just don’t seem to be easily configured in this way. While Jenkins X looks like it’s on this path, we’re already looking for alternatives. The example here is very very simple, but it supports our ephemeral environments and provides an auto-registration code for agents. This may support a good portion of our teams needs at this point.

The configuration above also adds a repository to scan for pipeline jobs. It can easily be extended within the configmap, though I’m not yet sure if the server supports hot-reload or not.

Yes, they exist, and are seemly easier than Jenkins pipelines (though likely less flexible). The following example is the pipeline code that I’m playing with that is referenced in the config-repo outlined above. In this instance, the custom agent was leveraged and simple shell scripts were called from our .gocd directory that simply auth into openshift with the oc utility and then run the ansible playbook. This was an easy workaround since there aren’t a whole lot of plugins for GoCD (which is likely a good thing).

What’s there to say here… there aren’t a lot of them, but they do exist. It was easy enough to customize the agent with the tools needed and write the scripts necessary to execute them. This didn’t take any time at all and helps keep the team away from the “plugin update hell” that many Jenkins users experience. Our choice to augment our deployment patterns with Ansible provided us a lot of flexibility when it comes to secret management, chat integration, etc. Teams will need to determine some middle ground of “interconnect” to link GoCD into their existing systems.

That said, for the existing plugins that exist, they are simple jar files that are dropped into a directory of the container. No fussing about here.

At first glance, the auth plugins to GoCD are pretty limited. There was a generic OAuth plugin that was replaced by 3 specific plugins (GitHub, Google, GitLab) + a couple others. The Jenkins + OpenShift experience is pretty slick, so this code attempts to mimic that experience(within my 1 day testing time limit). This is close, but not entirely the same experience.

The below code leverages the OpenShift OAuth proxy to verify that a user has appropriate access to the namespace, and if so, grants access to GoCD. This is a basic form of authentication and should be further developed for production use. It does NOT:

With that said, it’s functional and does meet the needs for our teams to only allow their team members access to the environment, but ultimately they all share the same access level (which is a-ok with them); 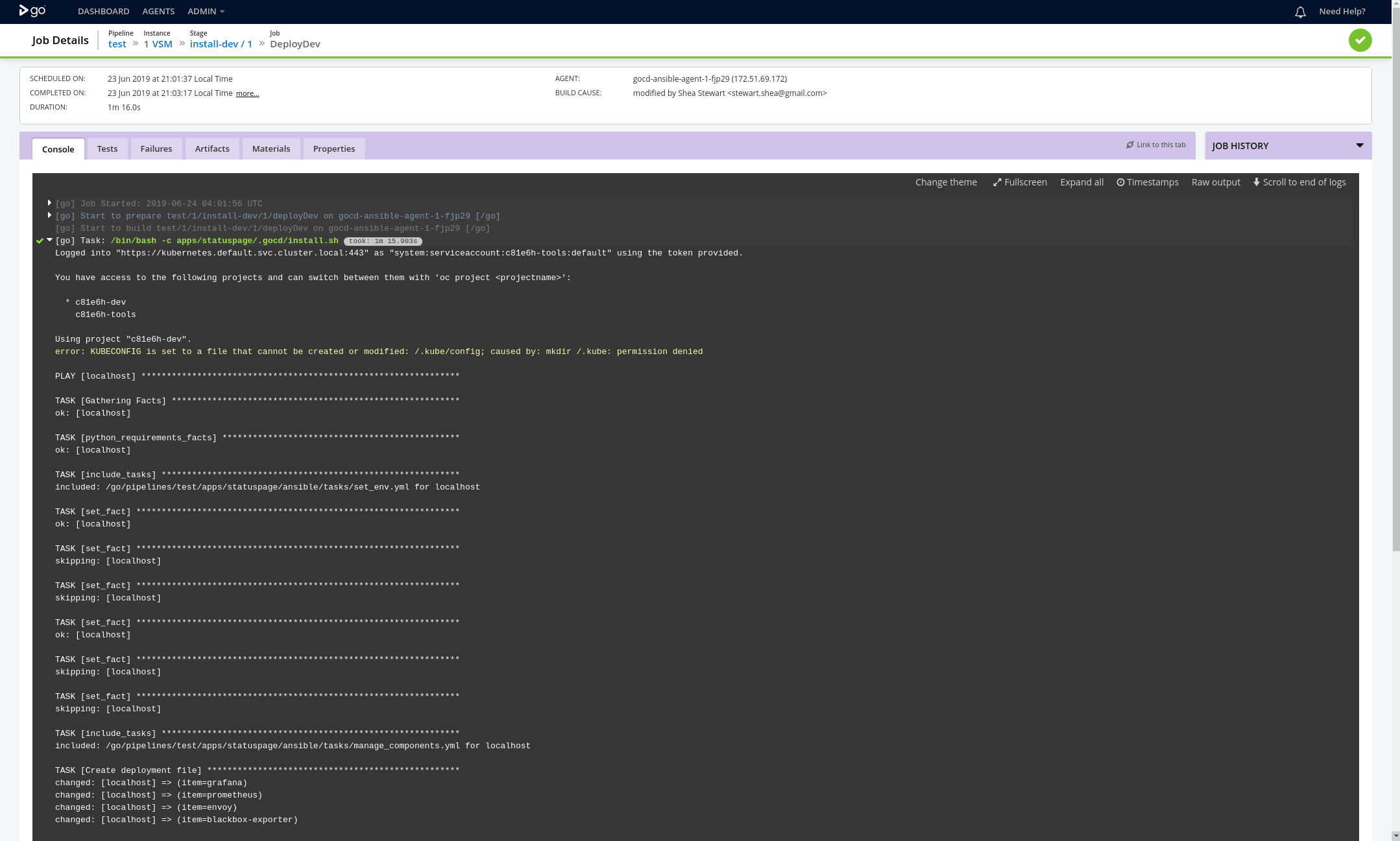 So… the [current] verdict?

This was no SaaS CI & CD experience. It took a little bit of learning and effort to get running, but that was also to closely mimic the experience of Jenkins in an on-prem manner with teams owning their own instances. With the little time I’ve spent with the tool, it seems to be flexible and stable, and most of my time was spent on the integration and not actually learning the tool itself. This is a pretty big win.

I’m not sure that the architecture lends itself to a large scale “central” platform just yet, but I’d like to play with that idea more in the future.

From a resource perspective, the memory utilization seemed a bit on the high side (there’s quite a bit of Java in all of this), but the CPU utilization dropped very low after the initial startup of the server, and the agents can easily be autoscaled. 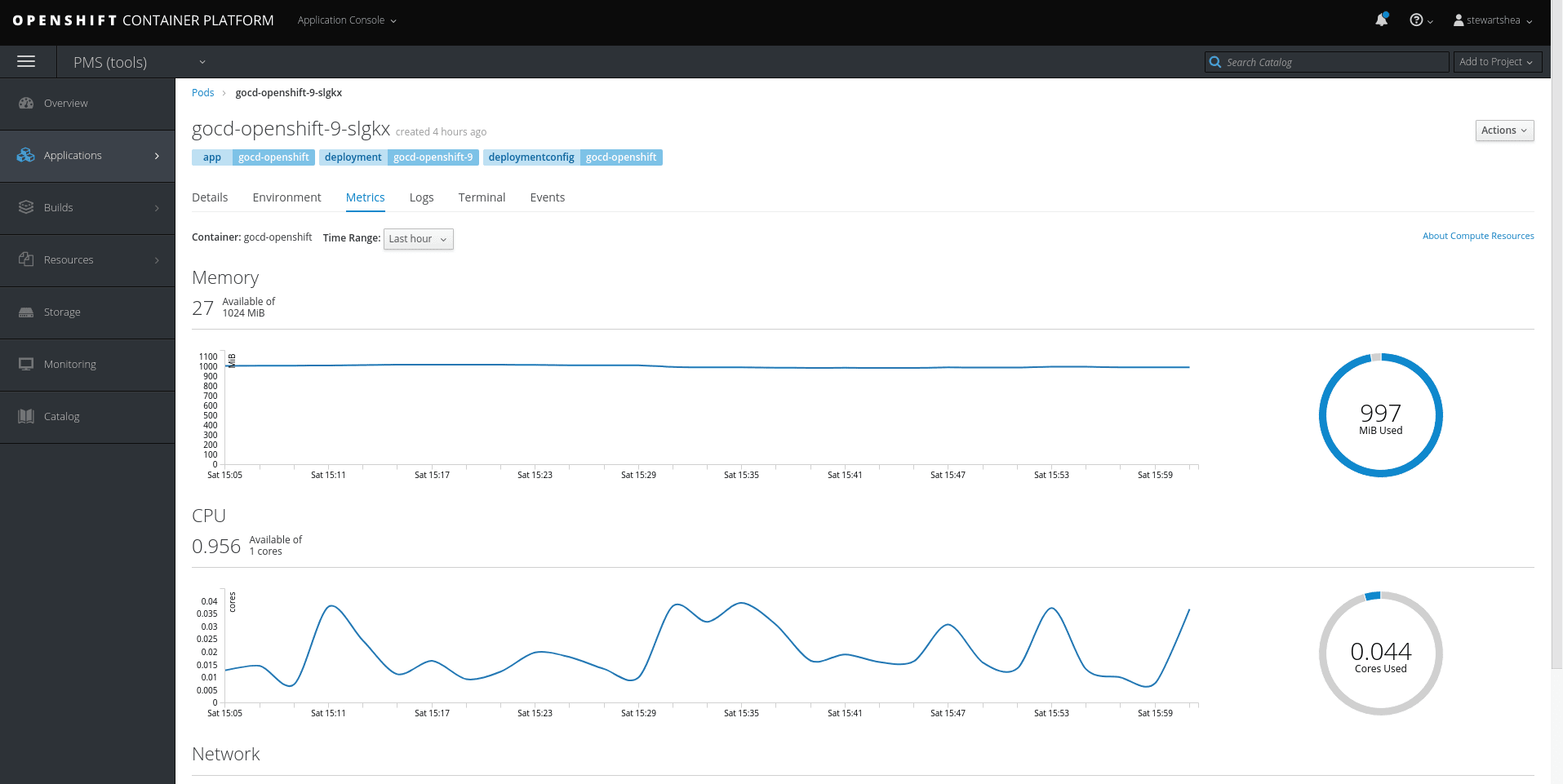 The big question: Is this a viable alternative to Jenkins running in OpenShift? I’d say yes.

We would love to hear from you.